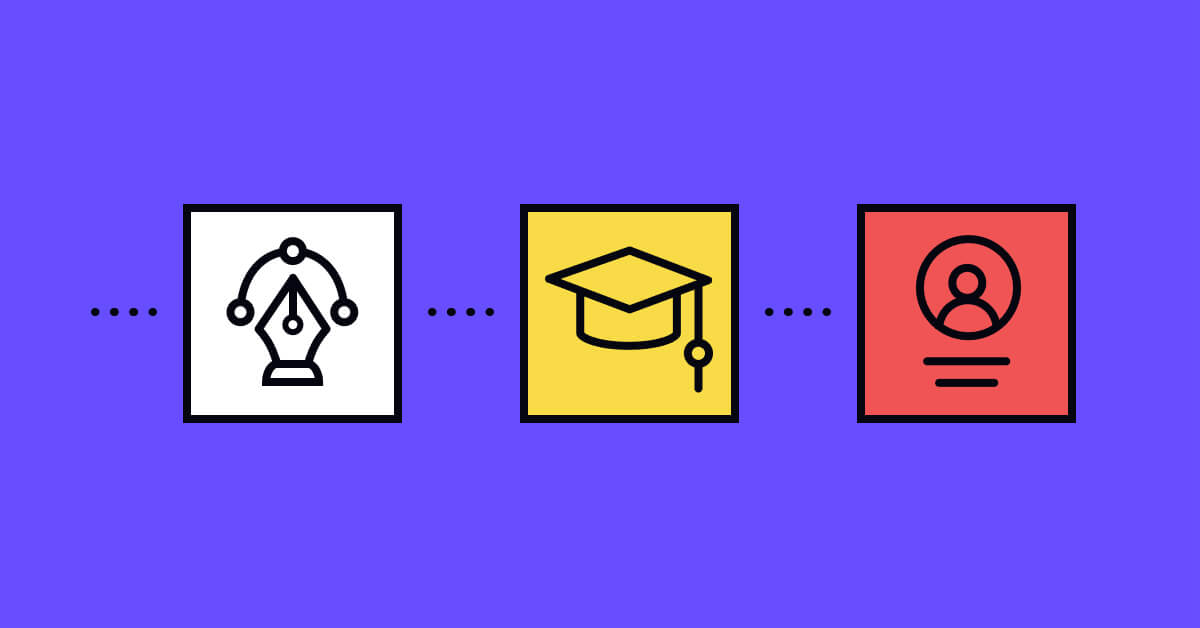 User experience (UX) and user interface (UI) design are two separate, but related, design disciplines. There are designers who specialize in one or the other, as well as designers who do both. So what are the differences and similarities between the two? And which kind of design should you learn?

What is UX design?

UX designers focus on the experience users have while interacting with a digital product. Much of the work they do comes in the early stages of the design process. They do things like user research, user interviews, and wireframing. Basically, the UX designer is responsible for the underlying functionality of the product and less on the purely visual aspects.

UX designers consider the entire user journey when making decisions. They think about all of the steps necessary for users to complete tasks on a website or app and how to make that process as efficient as possible. UX designers are also involved in the user testing process throughout the design project, to ensure that the visual solutions meet user needs and expectations.

What is UI design?

UI designers often work on a project based on the findings and recommendations of the UX designer. They create the finished user interface, with all of the visuals and functionality in place. They’re responsible for the look and feel of the product.

UI designers need to have a thorough understanding of what a UX designer does, though. They need to know how to take the findings from the UX designer about the needs of the user they’re designing for and effectively apply them to the visual elements of the product.

Similarities between UX and UI design

Both UX and UI design focus on creating user-friendly digital interfaces. They work on websites, apps, and other digital products.

Both disciplines are concerned with the user-friendliness and creating a functional product. They both aim to delight users and create an experience that fulfills their needs.

Here are a few other things they’re likely to both work on:

When it comes to wireframing and prototyping, their work also differs somewhat. UX designers are likely to work on early wireframes and prototypes, while UI designers may work on later versions, or expand upon what the UX designer has done.

Both UX and UI designers benefit from a thorough understanding of design thinking processes. While they often work on different (but overlapping) parts of that process, knowledge of how the entire process works is essential.

UX and UI designers also need to share some of the same skills. Both need to have solid customer service, research, and project management skills. They both need to be excellent communicators, be open-minded, and have empathy for users.

Differences between UX and UI design

While UX and UI share a lot of similarities, there are also some stark differences between them. The main difference, already mentioned, is the phase of the design project where they’re most active. UX designers will do most of their work at the beginning of a project, before much of what we think of as “design” even begins. UI designers, on the other hand, spend most of their time on a project during the later phases, when visuals are actually being created.

Their mindset when designing digital products also differs somewhat. Both UX and UI designers need to have problem-solving skills. But UX designers will generally approach problems from an analytical viewpoint, while UI designers tend to approach the same problems from a creative viewpoint. UX designers will analyze the data they have available to come up with solutions (which can absolutely still be creative), while UI designers may focus more on coming up with solutions based on their own creative instincts. When UX and UI designers can work together on this problem-solving, they often come up with innovative, unique solutions that work for users.

As far as skills go, here’s a quick rundown of the different kinds of skills each type of designer needs:

That’s by no means a comprehensive list of differences, which can also vary based on the project or company a designer is working for.

So what about UX/UI designers?

On larger teams, UX and UI design roles are generally filled by separate people (and in some cases there may be multiple people in each position), in smaller teams, one designer may fill both roles. These unicorn designers are able to guide a product from start to finish, including everything from user research and creating initial concepts to creating finished design files to hand off to developers and engineers. These designers need to have both exceptional analytical and outstanding creative skills.

Which one is right for you?

If you don’t shy away from analyzing data and trying to understand what makes people tick, then UX design might be the perfect path for you. If you’d rather not dive into tons of data and focus more on creating something beautiful that people love, then UI design is probably a better fit. Of course, if all of the above sounds great to you, you can create a hybrid career working as both a UX and UI designer. The next part of this Guide will dive more into specific design roles and career paths.

What is UX and UI Design?
Types of Designers
Learning Design Fundamentals
Design Learning Tools
Ongoing Education
Practice Projects
Building Your UX Design Portfolio
Be a Design Enthusiast
Getting Your First Design Job
We use cookies 🍪 to analyze our site and deliver personalized content. By clicking “Agree”, you content to our Cookie Policy. You may change your settings at any time.
AgreeCookie Settings